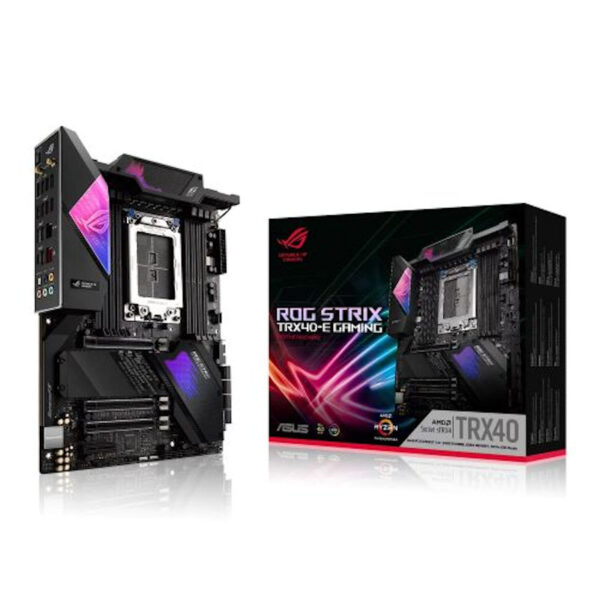 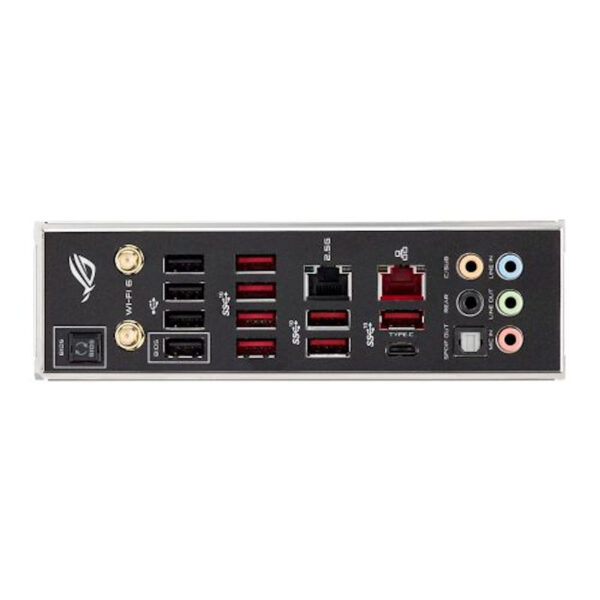 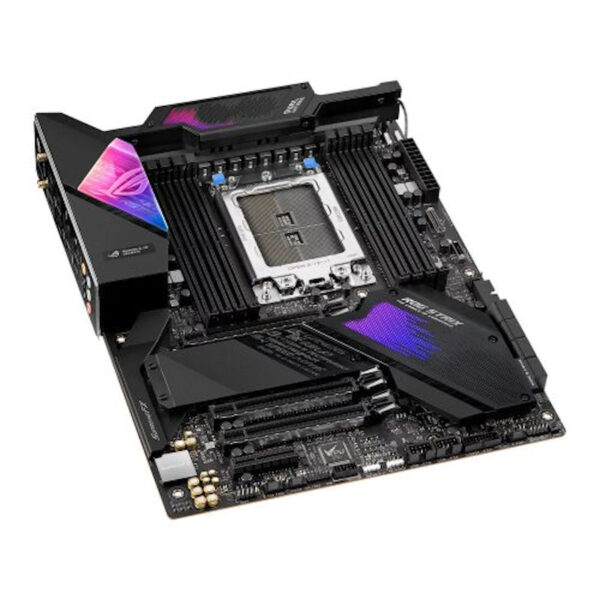 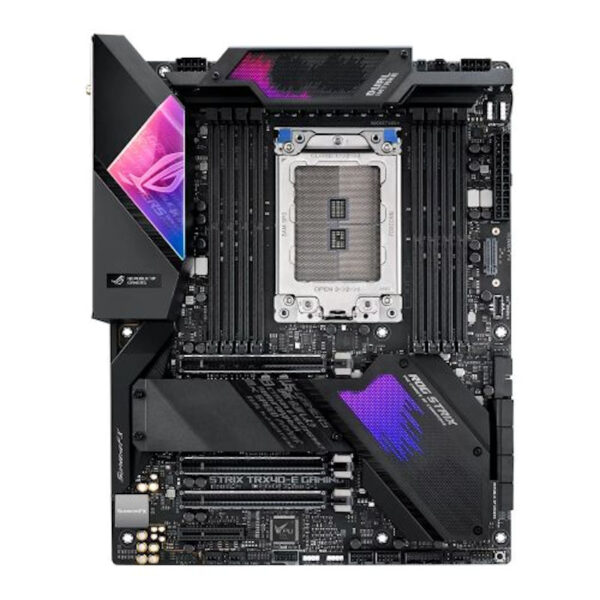 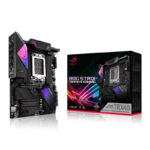 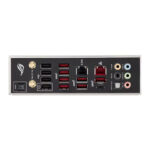 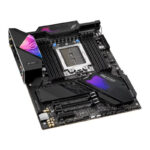 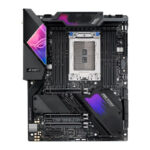 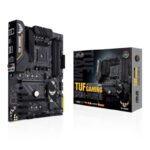 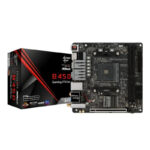 With comprehensive cooling options and robust power delivery to fuel CPUs with more cores, plus faster storage and memory, ROG Strix TRX40-E Gaming provides all the essentials you need to harness the full potential of components in your build for top-tier gaming performance.

Digital power control and an array of power stages ensures ROG Strix TRX40-E Gaming has the muscle to control the latest Threadripper CPUs.

ProCool II sockets are built to tight specifications to ensure flush contact with the PSU power lines and have a metal armor for improved heat dissipation. The connector’s lower impedance helps prevent hotspots and improves reliability.

An active VRM heatsink provides a large contact area for the MOSFETs and chokes, enabling more efficient cooling of the MOS heatsink for better performance and wattage resistance.

The M.2 heatsink keeps the Dual M.2 SSD at the optimum operating temperature for consistent performance and reliability.

A backplate on the rear of the board helps balance MOSFET temperatures while providing structural reinforcement.

A high-quality thermal pad helps transfer heat from the inductor and phase array to the heatsink.

Water Pump + Header
A dedicated header that can supply over 3A to high-performance PWM or DC water pumps.

The M.2 heatsink keeps the dual M.2 SSDs at the optimum operating temperature for consistent performance and reliability.

ROG Strix TRX40-E Gaming is engineered with the latest connectivity for the best gaming experiences. Transfer files faster and banish lag as you secure more victories.

Triple PCIe 4.0 M.2
ROG Strix TRX40-E Gaming features triple M.2 slots. The M.2_3 slot supports both SATA and PCIe 4.0 x4 modes, and the other slots support PCIe 4.0 x4 for NVMe. Together, they give you the fastest and most-flexible M.2 interface available.

A host of design touches, including a unique cyber-text pattern, plus customization options, comprehensive validation lists, and the most diverse ecosystem of components in the industry make building and personalizing a gaming rig with ROG Strix TRX40-E Gaming wonderfully easy.

Striking New Design
ROG Strix TRX40-E Gaming strikes an arresting pose, with or without RGB. A unique RGB rainfall pattern on the VRM heatsink provides a colorful accent to this critical component. The I/O shroud sports a laser-engraved ROG logo topped with an acrylic plate imprinted with ROG’s signature cybertext patterns, so switching on the lights illuminates a whole new aesthetic dimension – unique style with a cyberpunk edge.

Outshine the Competition
ROG Strix motherboards deliver sterling performance, accented by aesthetics to Outshine the Competition. ASUS Aura offers full RGB lighting control with a variety of functional presets for the built-in RGB LEDs as well as strips connected to the onboard RGB header – and it can all be synced with an ever-growing portfolio of Aura-capable ASUS hardware.

Livedash OLED
ROG Strix TRX40-E Gaming is equipped with LiveDash, a built-in 1.3″ OLED panel that displays useful information and customizable graphics. During the power-on, self-test (POST) phase, LiveDash shows key progress stats in simple language and via traditional POST codes. Then, during normal operation, the panel shows a choice of CPU frequency, device temperatures, fan speeds or information from the Water Cooling Zone. You’re even able to customize the default LiveDash GIF, so that it’ll display your own image or animation.

Certified Compatibility
Having the freedom to pick and choose the parts that go into your machine is at the heart of PC DIY. That’s why ROG Strix undergoes an extensive certification program focused on providing the very best compatibility with the widest range of components and devices. Our extensive list of guaranteed-compatible components is an invaluable aid to building a ROG Strix gaming rig. It specifies thousands of compatible parts, and it includes a dedicated Qualified Vendor List (QVL) for memory – so you can build fuss-free.

The ROG Strix Ecosystem Awaits
Gear up with ROG Strix components, from graphics and sound cards, to mice and keyboards, and up your game with complementary aesthetics, control and compatibility – and enjoy more choice than any competing brand.

Shielded Audio, Superior Sound
Immerse yourself in sound with SupremeFX audio technology. Utilizing the S1220A codec, SupremeFX is the integrated-audio solution that’s engineered to provide a flat frequency response for a neutral, detailed sound signature. And to ensure that pristine signature is perfectly preserved, the front-panel output is driven with dual op amps, delivering sonics with the scale and authority to create virtual worlds via your gaming headset.

Dual OP amplifiers
With two op-amps onboard you’re able to pump exceptional audio to your favorite cans, with 32-600-headphone impedance for great flexibility.

Tune Your Rig the way you Want

The ROG Strix TRX40-E Gaming motherboard features firmware controls and software utilities designed for all skill levels, making setup, tuning and system maintenance simple. With options from overclocking and cooling to managing network performance and audio characteristics, you can configure your ROG Strix gaming build to perform the way you want.

5-Way Optimisation
Take care of complex tuning with just one click. ASUS 5-Way Optimization makes your PC smart by dynamically optimizing essential aspects of your system, providing overclocking and cooling profiles that are tailored for your rig.

CPU-Performance Boost
The TurboV Processing Unit (TPU) is an intelligent onboard micro-controller that provides an array of system-tuning features, including the ability to fine-tune voltages, monitor system stats and adjust overclocking parameters.

UEFI BIOS
The renowned ROG UEFI (BIOS) provides everything you need to configure, tweak, and tune your rig. It offers intelligently simplified options for newcomers to PC DIY, as well as comprehensive features for seasoned veterans.

Fan Xpert 4
Enjoy comprehensive control over fans, water pumps and all-in-one (AIO) coolers, via either Fan Expert 4 or our award-winning UEFI. Whether you’re cooling with air or water, Auto-Tuning mode intelligently configures all parameters with a single click. There’s also an Extreme Quiet mode, which reduces all fan speeds to below the default minimum – keeping your system whisper-quiet when performing light tasks.

Turbo App
AMD’s processors feature per-core tuning, and the ASUS Turbo app makes use of this feature by letting you assign applications to specific processor cores, prioritizing computing power where it’s needed most.

The Power of AMD