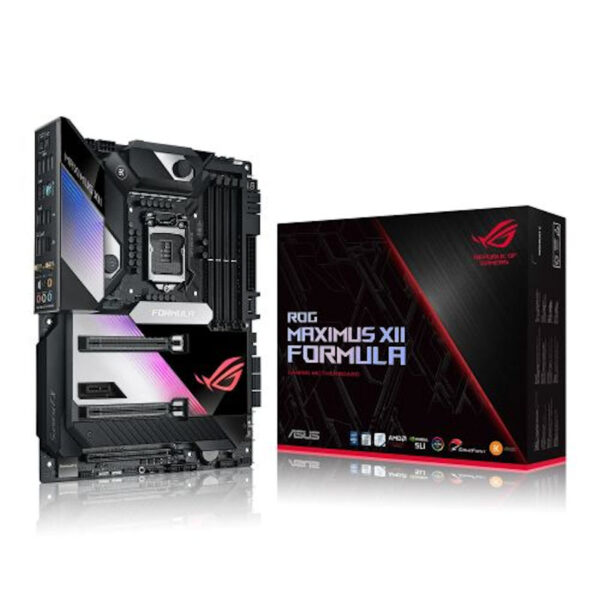 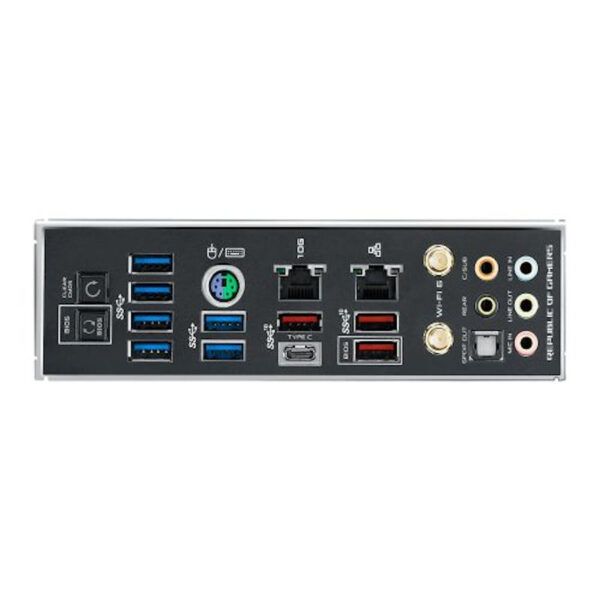 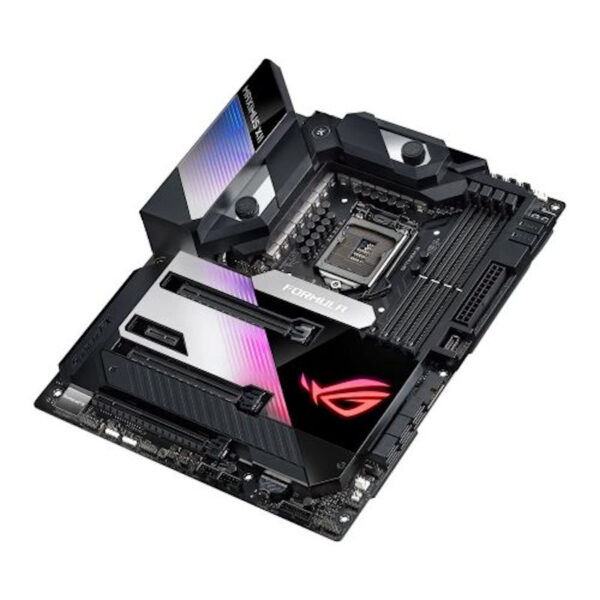 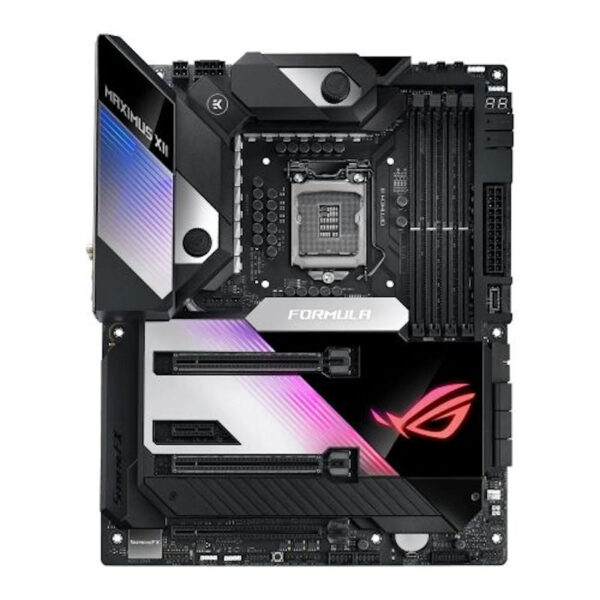 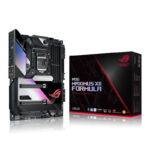 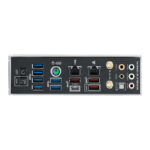 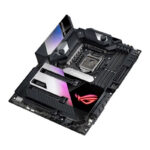 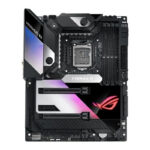 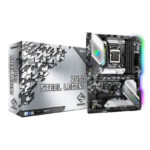 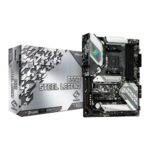 AI Overclocking
Tuning is now faster and smarter than ever before. AI Overclocking profiles the CPU and cooling to predict the optimal configuration for each system.

The Intel Comet Lake processor features 10 cores and a peak single-core Turbo speed that exceeds 5.3 GHz right out of the box. To cope with this increased demand on the system, Maximus XII Formula takes advantage of its intelligent VRM design and uses quality components to ensure the best gaming and daily productive computing experience.

The focus on maximizing performance would be futile without similar dedication to improving the cooling that allows systems to sustain faster speeds. The CrossChill EK III VRM block enables Maximus XII Formula to cope with the high VRM loads of ten core CPUs. The hybrid cooling system sits atop of a heatpipe that’s directly linked to the extended VRM heatsink, giving it cooling capabilities that surpass the requirements of this current generation.

CrossChill EK III lets you cool with air and water. The redesigned copper cooling channel is wider to provide up to 37.2C-lower MOSFET temperatures on water, while the standard G1/4″ threaded fittings allow it to fit existing setups for efficient, quiet cooling with minimum effort.

Large-diameter heatpipe
The U-shaped design provides rapid and even heat transfer from the VRM to the extended VRM heatsink.

M.2 heatsink
A dedicated heatsink keeps the two M.2 SSDs at the optimum operating temperature for consistent performance and reliability.

High-conductivity thermal pad
The high-quality thermal pad improves overall heat transfer from the system by bridging the heat generated by the power stages to the heatsink.

Multiple temperature sources
Each header can be set to monitor and react to three user-configurable thermal sensors for workload-based cooling. And all settings can be easily managed by Fan Xpert 4 or UEFI.

4-pin PWM/DC fan
Every onboard header supports auto-detection of PWM or DC fans.

Dual water-temperature headers and a flow-rate header feed information straight into the AI Suite utility, allowing you to track coolant temperatures and the flow rate of the entire loop.

Water pump+
A dedicated header can supply over 3 amps to high-performance PWM or DC water pumps.

Water in/out
A dedicated header enables monitoring of temperatures at the input/output points of any component.

Maximus XII Formula is packed with intuitive and flexible tools to allow customization across all system parameters to deliver the performance you want.

Conventional motherboards use single-ended sensing tapped from a location that isn’t ideal, leading to a large disparity between the actual voltage fed to the CPU and the value reported to software. Maximus XII Formula features a differential-sensing circuit and delicate IC that simplify overclocking and tuning by allowing you to track voltages more accurately.

The renowned ROG UEFI (BIOS) provides everything you need to configure, tweak, and tune your rig. It offers intelligently simplified options for newcomers to PC DIY, as well as comprehensive features for seasoned veterans.

The dashboard-style control panel of AI Suite 3 lets you fine-tune almost every aspect of your ROG Maximus XII Formula system with ease. Get the best balance between performance, cooling, stability, and efficiency via one simple and intuitive interface.

Maximus XII Formula is well equipped to deliver supersmooth wireless connectivity and compatibility with multiple input sources and PCIe extensions, all of which are a must-have for gaming setups.

Three PCIe 3.0 M.2
Three M.2 slots are wired directly to the PCH. One slot supports both SATA and PCIe 3.0 x4 modes, while the other two supports PCIe 3.0 x4 for NVMe. Additional Intel Optane memory recognizes, remembers, and speeds up access to most frequently used files, applications, and games for faster, more responsive performance.

10 Gbps onboard Ethernet
Designed to meet the demanding requirements of power users and content creators, 10 Gbps onboard Ethernet provides a new level of home networking. With up to 10X the bandwidth of standard gigabit Ethernet, you’ll enjoy streaming uncompressed 4K UHD videos, and backups and file transfers that are faster than ever before. **

SupremeFX
ROG SupremeFX audio technology has levelled up, delivering an exceptional 113 dB signal-to-noise ratio on the line-in connection to provide best-ever recording quality. There’s also a low-dropout regulator for cleaner power delivery to the SupremeFX S1220 codec, an ESS ES9023P digital-to-analog converter for superior front-panel output, and a Texas Instruments RC4580 op amp for high gain with low distortion – all to deliver audio that envelops you as never before.

Grow your gaming world
Gear up with ROG components, from graphics and monitors to mice and keyboards. And up your game with complementary aesthetics, control and compatibility. The ROG ecosystem is more extensive than any competing brand, so enjoy greater choice as your system expands.

Sonic Studio III
Sonic Studio supports HRTF-based (head-related transfer function*) virtual surround for headsets, casting an immersive aural landscape that draws you deeper into the action. The intuitive Sonic Studio interface also offers a range of EQ options and one-click presets, allowing you to tailor acoustics to suit personal preferences or the characteristics of your headset.

DTS : Sound Unbound
ROG Maximus XII Formula includes a pre-loaded DTS Sound Unbound app that envelops you in audio as never before, conjuring whole new levels of immersion for extraordinary gaming and entertainment experiences. By exploiting Windows Sonic spatial technology, DTS Sound Unbound delivers audio in a virtual 3D space – putting you right in the middle of the soundscape, where you can sense the location and direction of every gunshot, footstep or other sound in your virtual environment.

Armoury Crate is a software utility designed to provide centralized control of supported ROG gaming products. From a single intuitive interface, Armoury Crate puts command of all your Aura gear at your fingertips with the new Aura Creator suite ready. The software also provides control of settings for a growing number of ROG products, making it easier to tune the look and feel of your system. Armoury Crate even offers dedicated product registration and ROG news feeds to help you stay in touch with the ROG gaming community.